The Story of Jennifer Lawrence, Her Maid and Some Buttplugs

In an interview with Conan O’Brien actress Jennifer Lawrence once told a hilarious anecdote about another popular sex toy: the buttplug. A hotel housekeeper once found a big box with a ‘copious amount of butt plugs in all different kind of colors’ under her bed. Well, the origin of that box was a long story Jennifer Lawrence said – she got them as a inside joke from a friend. She knew the maid was coming so Jennifer was like “Oh, I’ll just shove them under my bed so she doesn’t see all these butt plugs”. But as a good maid befits the girl also cleaned under the bed. When Jennifer came back all of her new sex toys were orderly placed in a beautiful display on her bedside table. Of course, Lawrence claims that the toys were giving to her as a joke, but we bet she might have decided to try them out before throwing them in the bin!

Rihanna Is Even More Kinky Than You Thought

On a trip to Paris a couple of years ago Rihanna visited a sex store in ‘The City of Love’ and reportedly dropped over $1,500 on sex toys within five minutes. Sources told the New York Post that “She didn’t want any assistance picking out items, she exactly knew what she was after”. RiRi picked out massage candles, some sexy lingerie and *gasp* a pair of handcuffs. We guess Rihanna wasn’t lying when she sang: “I may be bad, but I’m perfectly good at it”.

Nope, that is not Miley’s hand. Please look again. This X-rated goodie is called the ‘Hand of Adonis’ and is very popular among experienced fisting enthusiasts. Miley is embracing her sexuality – and she wants the world to know. She brought the sex toy up several times on her social media accounts, caressing her face and rubbing her thighs with the sex toy. We are not sure if she is just making fun or that she actually tried the toy herself. The tool is 16 and a half inches in length and according to the product description “not intended for beginners”. Duly noted.

Maggy Gyllenhaal and Her Friends Share the Same ‘Interest’ 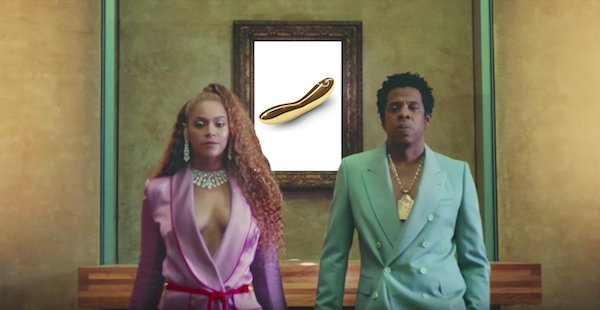 Even when you’re crazy in love a bedroom boost is always welcome. Power couple Beyoncé and Jay-Z understand this and have an appetite and love for playing with lavish sex toys. They once were spotted entering Babeland – a well-known and high end sex boutique in New York City. That day they reportedly spent $6000 on a wide array of X-rated goodies – according to a source who spoke to RadarOnline.com they didn’t buy anything tacky or extreme, just kinda all the “essentials”. But they did pick up some gold-plated pieces. What else did you expect? Their sex toys are just as glamorous as anything else related to the two!

The Purple Penetrator Gift Madonna DID Want You to See

Back in 2007 the “Like a Virgin” singer Madonna celebrated the birthday of her then husband Guy Richie in the luxurious Claridges hotel in London with some friends. What gift do you buy the man who is married to one of the world’s richest women and has everything he could wish for? You probably guessed it by now. Guy Ritchie was too embarrassed to carry the intriguing gift away – so his wife stepped in. The queen of pop carried the see-through bag with the clearly visible so-called Purple Penetrator proudly away.

Alicia Silverstone Has a Thing for Natural and Feminine Sex Toys

Top 50 Craziest Tattoos Of Celebrities in 2020

We try to stay on top of the latest celebrity news, and celebrities that get caught

Nobody is perfect. Neither are celebrities. Of course, at television, in the magazines and in the

It’s no secret Hollywood, or acting in big movies in general, pays well. Very well. In

Top 50 Craziest Tattoos Of Celebrities in 2020

A lot of celebrities do not know what to do with their money anymore in 2018.